Growing the Game of Golf in Southwest Florida 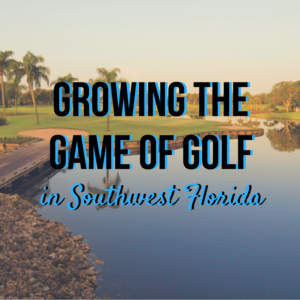 As we complete our summer at Estero Country Club, we take the time to reflect on this year’s supported efforts to “grow the game of golf” in our wonderful community. Despite all the doom and gloom you read in print and social media about the dying art of the game of golf – golf is alive and well at ECC!

This summer, we’ve seen the junior golf community flourish thanks to a dedicated group of young players, ECC’s golf professionals, and the support of southwest Florida! Estero Country Club will proudly continue to support junior golf and grow the game.

Growing Golf in the Community

The community had quite a busy season, on and off the course! Estero Country Club’s Assistant Golf Professional, Tom Donovan clear doesn’t get enough of golf at Estero Country Club, as he also coaches the Boys Golf Team at the Community School of Naples. The boy’s team recently finished second at Regionals and will be advancing to the State Finals, at the Mission Inn and Resort in Howey-in-the-Hills from Oct. 28-29. After finishing second in the district tournament, the Community School of Naples’ golf team, earned their spot in the regional tournament, hosted at Verandah Golf Club. While the game started tough, +13 for the first 4 holes, Harrison Ornstein inspired the team with birdies on three holes in a row. As word spread to the rest of the team, the boys’ confidence grew and they played the remaining 14 holes at +10, giving the team a total of 311, 23 over par.

Despite a strong finish, it was a close game from the rival teams. The boys didn’t let that sway their intent, and they ended up edging out Bishop Verot (312) and district rival Seacrest (314), advancing the Community School of Naples to the state tournament for the first time in three years!

The individual scores were:

Overall, it was great playing by every member of the team!

“We were struggling as a team,” Tommy Donovan told the Naples Daily News at last year’s tournament. This year looked a little brighter for the boys, as they soared to the State tournament.

We can’t wait to see the results of the State tournament October 28th and 29th at Mission Inn. Estero Country Club saw another team rise in the game of golf! Last month, The Estero High School Girls Golf team dominated the Districts and played a nail biting game at Regionals. After finishing second at the Districts, hosted at the Vineyards Country Club’s South, the team moved on to Regionals at Golf Hammock Golf Club in Sebring. While the team did not advance to the State Finals, Kim Egozi moved on to State as an individual.

Estero High School had a busy season! They participated in a state wide tournament in Sebring in September, finishing third, and completed their dual-meet season 11-1. To top it all off, the girl’s snagged the winning title as the Conference Championship. Southwest Florida also saw the rise of another Junior Golf star, Canterbury School’s Brittany Shin won the A-6 individual girls golf title Monday at Bradenton Country Club

All those southwest Florida teams showed grace, perseverance, and courage on the course this season. Estero Country Club is honored to be designated practice course for Estero High School, and we’re so proud of our very own Tom Donovan for lending his expertise to the Community School of Naples.

Here’s to another great year!

Sowing the Seeds of Golf at Estero Country Club

At Estero Country Club, we believe that sportsmanship and strong character building can start anywhere, even the course! Golf is alive in southwest Florida. Get front row seats to the next generation of golfers!

Whether you’re a junior golfer or seasoned golf aficionado, you can perfect your game and improve every swing with Estero Country Club. Take a tour of our course, or give us a call today to learn more: 239-267-7000!